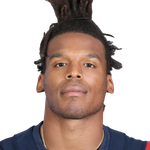 Newton missed most of last season with a foot injury, but wasn't very good in the two games he did play, completing just 56.2% of his passes. He has always made up for any deficiencies in his passing game with his legs, but at 31 years old and coming off two injury-plagued years, it's fair to wonder how much he'll contribute on the ground. Nevertheless, despite the less than stellar options at receiver, Newton will start at quarterback for the Patriots and they'll surely figure out how best to use his talents. That makes Newton a mid-tier QB2 with upside, despite all the uncertainty.