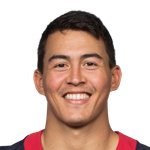 Fairbairn's accuracy fell significantly last year, from 88.1% on field-goal attempts and 95% on extra-point attempts in 2018, to 80% and 89%, respectively, last year. To make matters worse, Fairbairn's field-goal attempts dropped from 42 down to 25 last year. It's the perils of drafting any fantasy kicker, but on a decent offense and kicking mostly indoors, Fairbairn is worth drafting in a 12-team league, albeit it as one of the last kickers.