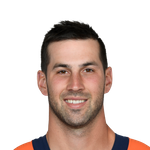 McManus bounced back from a few sub-par years, hitting 85.3% of his field-goal attempts and all but one of his extra-point attempts. The biggest difference for McManus was that he saw 34 field-goal tries, second-most of his career. With more offensive weapons for Drew Lock and a sturdy defense, McManus should again see plenty of chances. In the thin air in Denver, he's a decent bet to finish as a top-12 kicker, though should probably be drafted only in 15-team leagues.