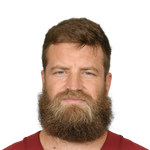 Fitzpatrick is going to start the season at quarterback for the Dolphins, but with Tua Tagovailoa waiting in the wings, it's unclear how long he'll last. Fitzpatrick closed 2019 strong with the Dolphins, and was a top-five fantasy quarterback over the final five weeks. But the Dolphins have perhaps the worst offensive line in football and are unlikely to compete for a playoff spot. He's only worth drafting as a backup in superflex or two-quarterback leagues and, even then, don't expect to be able to roster him past the midpoint of the season.