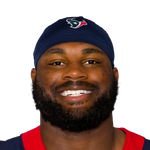 Freeman carved out a role on the short side of a platoon with Phillip Lindsay in the first half of the season, particularly with his involvement as a receiver. But the Broncos turned over nearly full control of the backfield to Lindsay toward the latter half of the season, and Freeman lost nearly all value. Now, with Melvin Gordon in the fold, it's nearly impossible to see Freeman adding any fantasy value absent multiple injuries. There's no reason to be concerned about him other than in extremely deep leagues.