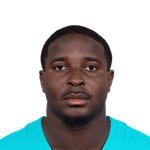 Michel has justifiably fallen out of favor for fantasy owners after yet another sub-par year, and there's little excitement about him this year. He has averaged nearly 16 carries per game in his career, however, and may be asked to carry more of a load now that Tom Brady is no longer under center. But his upside is limited by his complete lack of involvement in the passing game, as he has just 31 targets and 19 receptions over his 29 career games. In standard scoring leagues, there's a chance he may be slightly undervalued given that Damien Harris was placed on IR and Lamar Miller was released, but it would be hard to rely on him as anything more than a bench player in or half- or full-PPR leagues. That's especially true given his foot surgery in May which could impact him early in the season.