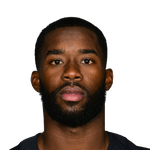 He was a model citizen last year, posting at least 9.2 half PPR points in 13-of-16 games. That's going to change with the arrival of Diggs. There were just three games last year where Brown didn't see at least five targets. In fact, he saw eight-plus targets in 50 percent of the games. Losing volume will be damaging because he already lacked upside (finished with more than 13.4 half PPR points just three times last year). The Jets secondary is one that can be attacked as one of the worst in football, as they don't have an above-average cornerback on the perimeter. Pierre Desir was their "big" signing in free agency, but he was continually torched with the Colts last year, allowing 46-of-72 passing for 676 yards and five touchdowns in his coverage. He's also been dealing with a hamstring injury throughout camp while learning a new defensive scheme. Because of that, there's an avenue to success for Brown in this game, though it would require him to do more with less. Given the Bills are big favorites, it's unlikely Allen throws the ball more than 30-34 times. Because of that, consider Brown a boom-or-bust WR4 in a plus matchup.