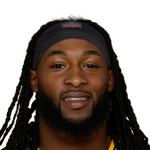 This is a backfield that no one can tell you how it'll shake out with 100 percent certainty. The Packers drafted Dillon with a second-round pick, so that means they'll use him, right? Looking back over the last seven years, there have been 17 running backs drafted in the second round. Only four of them saw fewer than 123 touches and finished outside the top 46 running backs. So yeah, he likely matters. The Vikings allowed just the 12th-fewest points to running backs last year, but not because they were dominant or anything. The 4.39 yards per carry they allowed was the 11th-most in football, and they lost their best presence up the middle of the field in Linval Joseph. He recorded 19 run stops last year, while the runner-up Shamar Stephen totaled 10 of them. They snagged Michael Pierce in free agency to help fill the void, but he opted out for the season, leaving them to start Jaleel Johnson alongside Stephen. You should know that even with Joseph, Jones tagged this unit for 270 yards and three touchdowns on the ground alone last year in the two games they played. He did total 46 carries between the two games, a number he's unlikely to get to with Dillon on the roster, but it's clear LaFleur's scheme works against a then-more-talented Vikings unit, so playing him as a borderline RB1 this week makes sense. I'd probably fade him in cash considering there still is risk attached, but in tournaments, he's a go.