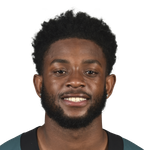 It appears Ward will start in 3WR sets, which offers value in games the Eagles fall behind or drop back to pass a lot, though I'm not sure Washington fits that bill. Teams averaged just 33.7 pass attempts per game against them, and wide receivers accounted for just 17.1 of them. That doesn't leave much for a No. 3 option at wide receiver (could argue No. 2 with Reagor out), and keep in mind that Zach Ertz and Miles Sanders are also ahead of him. We're not sure just how Washington will deploy their cornerbacks yet, but we're also unsure just how much Ward will play. He's someone who certainly benefits with Reagor out of the lineup, and the matchup is a good one, so he should be considered a decent last-minute WR4/5 option in this game.