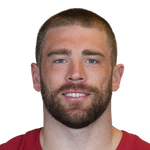 Now this is what it's like when worlds collide. Ertz and Goedert combined for 222 targets last year. Washington allowed the fourth-most fantasy points to tight ends last year. This is typically where you find an eruption. Ertz totaled 115 yards and a touchdown in two games against them last year, while Goedert chipped in with 71 yards of his own. While I like Jalen Reagor, we can't pretend he's not a rookie (he's out this week). DeSean Jackson is 34 years old. Ertz is clearly in his prime against a team that allowed 1.90 PPR points per target last year (7th-most in NFL). Now, it is a new defense being installed, but that's where the advantage really comes in for the Eagles, as Ertz/Wentz have played together for years in the same offense, while Washington is trying to learn how to communicate amongst each other. With tight ends, communication is paramount, as you'll have one of a cornerback, linebacker, or safety assigned to him, and if one man misses his assignment, Ertz will take advantage. Over the last two years, there's been eight games Alshon Jeffery has missed. Ertz has averaged 10.1 targets in them. Start him as a high-end TE1 in this contest and someone who's an excellent tournament play.