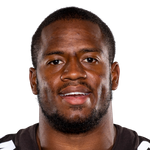 It was a tale of two tapes when Chubb saw the Ravens last year, turning in a ridiculous 183-yard, three-touchdown performance in Week 4, but then falling flat on his face in Week 16 when he finished with just 45 yards on 15 carries. What changed? Defensive tackle Brandon Williams was out for the Ravens in their Week 4 meeting, and he's been a difference-maker when on the field. The Ravens did lose Michael Pierce and Chris Wormley on the interior of their defensive line this offseason, though they tried to make up for that, trading for Calais Campbell, a player who's continually one of the best in the league. The big change for Chubb will be the Kevin Stefanski offense that should fit his skill set extremely well. The Browns added both Jack Conklin and first-round pick Jedrick Wills to the offensive line, which should be massive upgrades over Greg Robinson and Chris Hubbard. Still, it may take some time for them to finesse the scheme and develop chemistry together. The biggest issue for Chubb (and Hunt) this week is that the Ravens opponents averaged just 22.3 running back touches per game. No other team allowed their opponents less than 23.1 touches. That's because they control the clock and allowed their opponents just 57.6 plays per game. If the Browns defense can't slow down Lamar Jackson, we're unlikely to see Chubb and Hunt total more than 25 combined touches. Chubb averaged 6.0 fewer PPR points per game in games the Browns lost last year. He's more of a middling RB2 this week than the RB1 you thought you drafted.