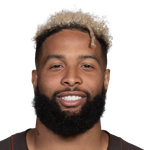 After playing through a groin injury last year, and in Freddie Kitchens' offense, many are worried about Beckham in fantasy. Guys, he's posted at least 1,035 yards in 5-of-6 seasons despite playing 16 games just twice. However, this week does present some real concern. It's the Browns' first game under the expected run-heavy approach of Kevin Stefanski, and the Ravens just happen to have one of the best cornerback units in all of football. Despite them facing the third-most targets to wide receivers, they allowed the 14th-fewest points to them. It's not to say they can't be beat - they can. It's just understanding expectations. There were just three receivers who finished top-12 against them last year, and all of them were slot-heavy receivers (Jamison Crowder, Jarvis Landry, and Mohamed Sanu). There were another nine wide receivers who finished in the WR2 range, and though many of them were also slot options, there were some perimeter receivers. This is not a week to get excited about Beckham in such a tough matchup but know that there will be better days. He should still be locked into six-plus targets and considered a low-end WR2.