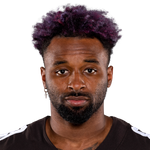 He's coming off hip surgery and was just cleared to come off the PUP list a few weeks ago, so there could be a slow start to his season. That's the concern. The reason for optimism is that he played extremely well against this tough defense last year. In two games, he piled up 15 receptions for 241 yards, finishing as the WR5 and WR27 in those games. That was under the previous coaching staff and if the Browns are moving towards more 12 personnel (1 running back, 2 tight ends) under Stefanski, it would mean less slot duties for Landry. That means he'll see one of Marcus Peters or Marlon Humphrey in coverage, which is not ideal. The two of them combined to allow just 1,075 yards on 165 targets in coverage, which amounts to just 6.5 yards per target. I'd like Landry more if he weren't coming off the hip injury, as he'll still play inside the slot more than Beckham and get away from Peters/Humphrey, but given the nature of the injury and the run-heavy offense, I'm a bit more cautious. I'd say he's a WR3 this week who has a wide range of outcomes, though I don't see a much of a ceiling here.