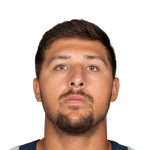 There are a lot of rumors about who will be used and how they'll be used in Kevin Stefanski's offense. After paying Hooper the money they did, you'd think he'd have a large role, but if you recall, the Vikings paid Kyle Rudolph a lot of money prior to last season, then split the targets 50/50 with Irv Smith Jr. Nothing is promised to Hooper, though I do expect him to lead this timeshare. Against the Ravens, I don't know if you necessarily want to start him to find out. They allowed just two tight ends to top 10 PPR points against them last year. One was Travis Kelce, who totaled 7/89/0 on eight targets, and the other one was Ricky Seals-Jones, who caught a long 59-yard touchdown. Hooper caught just two passes that traveled over 20 yards in the air last year, which ranked 15th among tight ends. I wouldn't feel comfortable playing Hooper as a TE1, especially given the matchup, though the loss of Earl Thomas does help the matchup. He should be considered a TE2 who's not even guaranteed more than five targets.