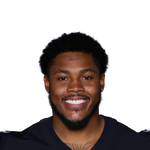 The Panthers were the team you wanted to play running backs against in 2019. They allowed a massive 5.32 yards per carry and allowed a touchdown every 14.0 carries. We can talk all day about how Jacobs doesn't catch as many passes as he should, but in this game, it won't matter. The Panthers allowed 363.1 fantasy points on the ground alone last year. No other team was above 297.8 points. The Panthers allowed 18 percent more fantasy points on the ground than any team in the league, think about that for a minute. Now, to be fair, they did hire a new defensive coordinator, but this team is clearly lacking talent to be an elite run-stopping unit. They also lost a lot of the talent they did have. It led them to an all-defense draft. Seriously, they didn't draft a single offensive player. That's a lot of young players in the starting lineup. Trust Jacobs as an RB1 this week and expect big results. He's worth both cash-game and tournament consideration.