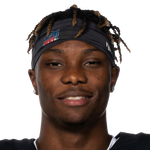 Most think Ruggs is just a deep threat with his 4.2-second speed. That's not his game. He's a guy who does well in the open field. The idea is to get him the ball quickly and let him do his work with elusiveness after the catch. The matchup in Week 1 is a good one, as opposing wide receivers averaged 14.2 receptions per game against the Panthers secondary last year, which ranked as the third-most in the league. On a per-target basis, they allowed just 1.67 PPR points, which was actually better than the league average. They were so bad against the run, teams were able to simply dink-and-dunk their way down the field, as evidenced by the 12.39 yards per reception to wide receivers. Their opponents averaged 65.1 plays per game, which is why we saw so many receptions available. Meanwhile, the Raiders only averaged 61.8 plays per game in 2019. Knowing they have the same coaching staff, we could see them increase the no-huddle approach this season. Ruggs isn't a locked-and-loaded WR3 in fantasy just yet, but the upside to finish as a top-20 wide receiver is there. I'll consider him a volatile WR4 for his first NFL game.