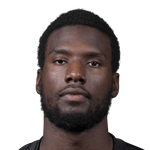 If you missed it, Tyrell Williams suffered a torn labrum in his shoulder during training camp. His season is over. With a lot less competition last year, Williams never saw more than seven targets in a game and didn't see more than four targets after Week 12, so we don't know how big Edwards' role can be, but he's fantasy relevant due to the injury. He's a third-round rookie who Derek Carr has reportedly fell in love with during training camp. It's still hard to trust a rookie wide receiver, especially when he's the third option on his team, at best. Edwards is a perimeter wide receiver who'll be the big-bodied target that Carr could look towards in the red zone, as he's 6-foot-3 and 212 pounds. The Panthers cornerback unit is questionable, at best. After losing James Bradberry this offseason, they replaced him with free agent Eli Apple and fourth-round rookie Troy Pride Jr. Pairing Apple with Donte Jackson, the Panthers have one of the worst cornerback depth charts in the league. They then lost Apple to injured reserve during training camp. Jackson allowed a touchdown every 10.0 targets in 2019, while Apple was on his third team in three years. Edwards will likely present value this season, but it's difficult to say how much right now, especially in a game where they should be able to run the ball rather efficiently. Consider him a WR5 for this week, but one who could have a bigger role than you think. If you have room on the end of your bench, add him before the games begin.