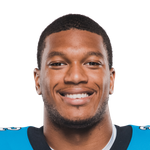 Most of the time, we can say that those who have experience with the quarterback and/or offense, they have a leg up on the rest of the receivers. That's the odd thing about the Panthers this offseason. They have a new offense being installed, as well as a new quarterback. Moore saw 135 targets last year, but does the addition of Robby Anderson hurt his ceiling? Anderson does have experience under Matt Rhule. I'm still siding with Moore, who's easily the best receiver on the roster. The Raiders allowed a massive 1.94 PPR points per target last year (fifth-most) but saw just 281 wide receiver targets on the year (eighth fewest), making them look better than they were. The 9.54 yards per target they allowed was the most in the league. They acknowledged the issue and added both free agent Prince Amukamara and first-rounder Damon Arnette to their cornerback unit this offseason. They wound up cutting Amukamara because they were impressed with Arnette, though just a week later, Arnette fractured his thumb. He's reportedly going to play with a cast on, which is far from ideal when covering someone as slippery as Moore. They don't do any shadowing, so Moore should see a mixture of Trayvon Mullen, Arnette, and Lamarcus Joyner. Knowing the changes and how it may take time for the new cornerbacks to acclimate, I still feel confident starting Moore as a solid high-end WR2 this week who presents WR1 upside. I wouldn't play him in cash lineups considering all the changes on his own team and that we haven't seen how the target share will play out, but he does deserve tournament consideration.