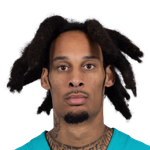 It's a welcomed change of scenery for Anderson, as he moves on from Adam Gase, and back with his former college coach, Matt Rhule. He's the No. 3 option at best on the team, though, and maybe fourth option. It does help that they have a new quarterback who hasn't developed a favorite just yet. This matchup actually suits Anderson's strengths well, as the Raiders allowed 15.4 yards per reception to wide receivers, which ranked as the third-most in the league. The downside here is that Teddy Bridgewater only attempted a deep ball on 7.1 percent of his attempts last year, which ranks as the second-lowest mark in the league. Anderson offers one-play upside but relying on it in his first game is a tough task, especially considering we don't know where he lands on the pecking order. It is noteworthy that he had one of his best games against this secondary last year, posting 4/86/1 in Week 12. He's more of a tournament play this week where you're looking for the Panthers to exploit the Raiders' weakness downfield. He should be considered a boom-or-bust WR4/5 option in season-long.