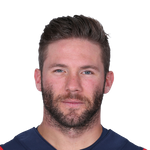 The Patriots go from a team that threw the ball an average of 600.7 times over the last seven years, to one that'll likely go towards a more run-heavy attack under Cam Newton. Edelman loses that connection that he and Brady had, which led to him averaging 9.6 targets per game over that time. Newton has tended to target big-bodied wide receivers over his time in the league, though he's never had a slot receiver like Edelman. The Dolphins suddenly have a very talented cornerback unit, though we could see Edelman match up with the weakest of the bunch, rookie Noah Igbinoghene in the slot. He's obviously never played a snap in the NFL, so we could see the Patriots exploit that area of the field. Edelman played 68 percent of his snaps in the slot last year, so he's clearly the one with the best matchup on the field. Slot receivers Jarvis Landry, Tyler Boyd, and JuJu Smith-Schuster all posted 103-plus receiving yards against this defense last year, even if the cornerback unit does look different. Edelman can be played as a semi-high floor WR3 this week.