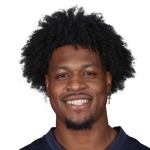 There are many who are gravitating towards Harry considering Cam Newton has continually targeted big-bodied wide receivers, allowing them to try and win their one-on-one battles. The issue with that this week is that Harry will be matching up against two of the better cornerbacks in the league. Not only did the Dolphins have Xavien Howard, but they also added Byron Jones in free agency, giving them one of the better 1-2 punches at cornerback. Both of them are at least 6-feet tall and weigh over 190 pounds, so they're not smaller guys that Harry can bully. It appears that Harry will be the No. 2 option among wide receivers, as the team moved on from Mohamed Sanu. Julian Edelman will always be the safety valve in Josh McDaniels' offense, but we could see Harry as the red zone target. With that said, it's best to sit back and watch how much playing time/targets Harry gets before trusting him as anything more than a touchdown-reliant WR5 option, especially against this cornerback duo.