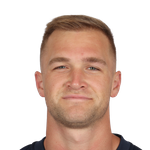 There have been a lot of people suggesting Gesicki will be the "big slot" receiver in Chan Gailey's offense, though that's a straight-up guess. Is it possible? Sure, though far from a guarantee. The Patriots were a brutal matchup across the board last year, and that included tight ends, as there were just three of them who topped 44 yards against them. Gesicki played against them twice, totaling just 1/11/0 on two targets in the first meeting but then 4/34/1 on seven targets in the second meeting. The Dolphins were lacking receiving options in the second game, leading to Gesicki's high target total. It also didn't hurt that the Dolphins threw the ball 41 times in that Week 17 game. The Patriots opponents averaged just 59.2 plays per game last year and knowing their offense will slow the pace down with Cam Newton, we could see a low-volume game for the Dolphins offense in general. The changing Patriots defense does make the matchup more appealing, especially knowing safety Patrick Chung opted out, so if you want to play Gesicki as a low-end TE1/high-end TE2, go ahead. He's one of the tight ends in that range I feel somewhat confident saying he'll see at least five targets, though it's not a lock in a new offense, especially knowing he was listed as the No. 2 tight end on the depth chart.