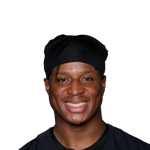 From the time Drake joined the Cardinals last year, he was the No. 4 running back in fantasy football. One thing from that stretch that is unsustainable is his touchdown production, as he scored eight rushing touchdowns on just 123 carries. He still averaged 101.8 total yards per game, but there were three games where he totaled less than 70 total yards. It was a mixed bag against this 49ers defense, as he absolutely demolished them in their first game, racking up 162 total yards and a touchdown. That was one of just two games where the 49ers allowed a running back to crack the 20-point barrier in PPR formats (the other was Christian McCaffrey). In fact, there were just three backs who reached 100-plus total yards against them. The next meeting between the two, Drake finished with 80 total yards and no touchdown. The 49ers did trade away DeForest Buckner, who was a a big reason for their success up the middle of the field, even if he was a better pass rusher than anything. They drafted his replacement in Javon Kinlaw, but he's a rookie with no experience. But again, knowing there were just eight running backs who finished better than the RB24 against the 49ers, we know it's not a great matchup. Drake should still net 15-plus touches in this game and be treated as a decent RB2.