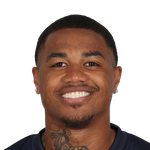 It seems the 49ers will have Bourne in the starting lineup come Week 1, though it's hardly something to get excited about considering he tallied more than 42 yards just once in 2019. He has scored nine touchdowns over the last two seasons on just 110 targets, which is impressive, but it's hardly predictable. The Cardinals were a team that he scored in both matchups against last year, though he had just five total catches in the two games for 38 yards. He's in line for a bigger role with all the injuries, but it could also mean less slot opportunities, which is where he's played well. Let's hold on contemplating Bourne for this week outside of deep leagues where he can be played as a WR5.