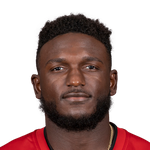 It's been rumored in camp that Godwin looks good, but that he's lacking something. He also missed a few practices throughout training camp, so it's something worth monitoring early in the season. The Saints cornerback unit is extremely good, especially since they added Janoris Jenkins at the end of the season. He'll replace the inconsistent Eli Apple opposite Marshon Lattimore. It's a tougher matchup than last year when Godwin hung 7/125/2 on them in Week 5, then 3/47/1 in Week 11. The Saints may not decide to shadow Mike Evans with Lattimore anymore considering Godwin's success, though Jenkins surely changes things. The combination of Lattimore and Jenkins allowed 87-for-159 passing in their coverage for 1,205 yards and seven touchdowns while intercepting six passes. That amounts to a QB Rating below 80. It is worth noting that Godwin's big game last year came while in New Orleans, but it was also before Jenkins was there. You're going to start Godwin in season-long leagues as a WR2 at worst, but it's not a week to feel very confident in cash games. I do like him better than Evans in tournaments, though.