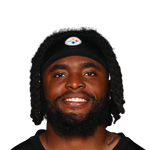 This will be Johnson's first full game with Ben Roethlisberger under center, as he played just 24 snaps in the first game last year (but still saw five targets), and then 26 snaps in the second game where Roethlisberger was hurt halfway into the contest. Did you know that even as a rookie, Johnson led the NFL in yards of separation at target for perimeter wide receivers? Keep in mind that's despite horrendous quarterback play. Johnson will play the Antonio Brown role in the offense, so if he's getting separation, he has massive target potential. The downside is that he'll probably see a lot of the Giants top cornerback James Bradberry. He's had some ups and downs in his career, but overall, he's a rock-solid cornerback. He was the bright spot in an otherwise horrendous Panthers defense last year, allowing just two touchdowns on 80 targets in his coverage. However, if the Giants play sides and keep him at RCB, it could be a free-for-all against Corey Ballentine, who was tagged for 392 yards and four touchdowns on just 43 targets and 180 snaps in coverage. Johnson has true breakout potential this year, and depending on how the Giants approach him, it could start this week. Consider him a low-end WR3 with some volatility baked in. *Update* Apparently, Johnson is dealing with some sort of toe injury that kept him out of practice on Thursday. They say it's not an issue, but we must monitor it as the weekend approaches.