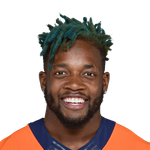 All we've heard out of Broncos camp is that they may be regretting their decision to pay Gordon all that free agent money, as Lindsay has looked like the better back. It's not surprising to those who've watched Lindsay over the last two years. There have been just nine running backs who've totaled 2,000 rushing yards over the last two years: Ezekiel Elliott, Derrick Henry, Nick Chubb, Christian McCaffrey, Chris Carson, Saquon Barkley, Joe Mixon, Todd Gurley, and Lindsay. It'll be interesting to see if this is a true 50/50 timeshare under Pat Shurmur. The Titans allowed the 13th-most fantasy points to running backs last year, with much of that production coming through the air, as they allowed 194.7 PPR points through the air alone, which ranked as the eighth-most in the league. I was guessing we'd see Gordon as the starter and getting a 55/45 split from the start, though it's also worth noting Gordon has reportedly had trouble adjusting to the Denver altitude. This could benefit Lindsay in the early going. Lindsay did total 70 yards and a touchdown on 15 carries against the Titans last year, too. For now, we must consider them both RB3s until we see what the true split is. Gordon likely gets first shot at goal-line work, so I'll say he has the slight edge, but it's not much.