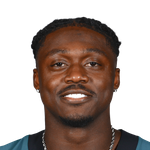 He's no longer a rookie or a secret. Brown is clearly a top priority of defensive coordinators, so let's hope the Titans move him around the formation a bit more, as he was in the slot on just 10.4 percent of his snaps in 2019. The Broncos used Chris Harris Jr. to shadow opposing No. 1 receivers last year, but he's gone. They brought in A.J. Bouye, though it's unclear whether he'll shadow opposing No. 1 receivers or if he'll just play a side. Bouye is just 29 years old, so it's difficult to imagine he's dropped off, but his 2019 season was not good. He allowed 772 yards and three touchdowns on 80 targets in coverage, which amounts to 9.65 yards per target. Among the 127 cornerbacks who saw at least 25 targets in coverage last year, that ranks as the 20th-highest mark. The concern is the slow game pace and limited attempts to go around, as we saw Brown targeted just 20 times over his final five games of 2019 (playoffs included). It's why he shouldn't have been considered a WR1 this year, as it's got nothing to do with his talent as a player. This matchup might be a great one if the Broncos don't shadow him with Bouye, but the lack of guaranteed volume keeps him in low-end WR2 territory.