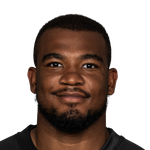 Smith has been Devonta Freeman's primary backup for two years, but has never seen more than 14 touches in a game. He'll again play second fiddle in Atlanta, this time to Todd Gurley. Even if Gurley were to get injured, however, Smith would likely split time with Brian Hill, making him only a low-end handcuff who isn't worth rostering in fantasy leagues.