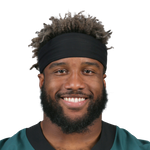 Miles Sanders got a huge boost when the Eagles opted not to sign a notable free agent running back, but Scott's stock has somehow still remained too low. Yes, there were plenty of injuries, but Scott averaged 87.5 yards from scrimmage over the last four games last season and would be in line for significant touches should anything happen to Sanders, who is already battling an injury (Scott had 23 touches in Week 17 after Sanders was injured). Scott should be in line for upwards of 10 touches per game anyway, and also offers the upside of being a locked-in fantasy starter should Sanders get hurt. He's being undervalued by the fantasy community.