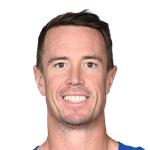 Ryan was having an outstanding season before he suffered an ankle injury. Even with his second-half decline, he led the league in pass completions and was fifth in passing yards. He's now got a better offensive line, another year of development from Calvin Ridley, and Todd Gurley as his running back. Even at his advanced age, if he bounces back at all from his 7.3 YPA and 4.2% touchdown rate last year, then in Dirk Koetter's system he could have a monstrous year.