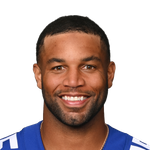 Tate missed four games last year after his suspension but he had a very solid year when he was on the field. He finished the season ranked 31st among wide receiver in fantasy points per game (half-PPR formats) and continued to excel in producing yards after the catch. Tate will be 32 years old when the season starts and will continue to compete for targets with Sterling Shepard, Darius Slayton, Evan Engram, and Saquon Barkley. But in full PPR formats at least, he should be a viable flex option most weeks. In standard or half-PPR leagues, however, draft him only as a bench player.