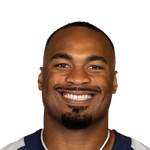 There is a pretty big disconnect between what the average fantasy football player thinks about Woods and what the expert consensus thinks about him, with the latter being significantly higher. Woods scored just three touchdowns last year but there is bound to be positive regression, and he's seen at least 130 targets in each of the last two years. With Brandin Cooks gone, and with how Woods came on toward the second half of the season, he's much closer to a WR1 than fantasy managers are giving him credit for.