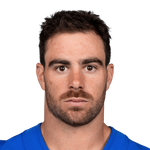 Higbee had one of the most unexpected and dominant short-term breakouts in recent memory last season. Over the final five games, he averaged 8.6 receptions and 104 yard per contest after being essentially a fantasy afterthought for his entire career prior. There are questions about heading into the season, including whether the Rams will continue running more of the 12 personnel they ran late in the year and the impact of a healthy Gerald Everett. But, there just aren't many tight ends who are even capable of doing what Higbee did at the end of last year, meaning he needs to be viewed as a mid-tier TE1, albeit with a bit of a skeptical eye.