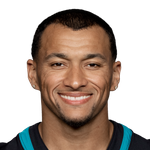 Engram is extremely talented, has one of the best rookie tight end seasons on his ledger, and is jut 25 years old. But despite all that, there are several strikes against him from a fantasy perspective. Not only has he missed 13 games the last two seasons, but he's also going to be sharing targets with Saquon Barkley, Sterling Shepard, Golden Tate, and Darius Slayton. He's a starting tight end for any fantasy team, but his star doesn't burn quite as bright this draft season as in previous years.