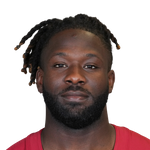 Pascal had his moments last year, including a two-touchdown game against the Texans and a two-game stretch in December when he caught 12 passes for 183 yards and a touchdown. But, overall, he made little noise in his second season. Although a third-year breakout was there to be had with Philip Rivers at quarterback, the Colts' drafting of Michael Pittman Jr. put a major damper on those prospects. Pascal will likely need an injury to get on the fantasy radar this year, so he's more of someone who fantasy managers should look at on the waiver wire rather than during their drafts.