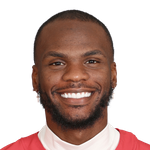 With injuries abound last season, Valdes-Scantling had his opportunities, but couldn't take advantage. Despite playing in all 16 games, he caught just 26 passes and scored two touchdowns. He fell behind Allen Lazard on the depth chart, and with the addition of Devin Funchess, it appeared that Valdes-Scantling wasn't likely to see the field all that much absent an injury. But now, with Funchess opting out, there's at least a plausible, albeit unlikely, path to fantasy-relevance. He's a late-round dart throw, but that's all.