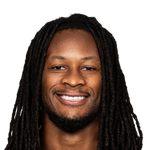 After Gurley totaled 19 of the Falcons 28 opportunities in Week 1 (67.9 percent), he totaled 21 of 34 opportunities in Week 2 (61.8 percent). Those are decent shares, but there is a warning sign above him. He caught just 1-of-5 targets in Week 1 and then saw zero targets in Week 2. If all he's getting is early-down work, he's going to be a touchdown-or-bust player. Targets are worth 2.5x what a carry is worth, so we don't care so much about his 21 carries that went for a measly 61 yards. Fortunately, he plays for a high-powered offense that should be in scoring position often. This week may not be one of those high-scoring weeks, though. The Bears aren't a cake matchup, especially with Akiem Hicks on the field. You can go back to last year and see they allowed 4.12 yards per carry without him, but just 2.92 yards per carry with him. The Falcons are projected for 25.0 points, which bodes well for Gurley considering the Bears have not allowed a quarterback more than two passing touchdowns since back in Week 7 of 2018. Gurley has received all five of the red zone carries for the Falcons this year. He's a touchdown dependent RB2 but one who has a better shot than most to get one this week.