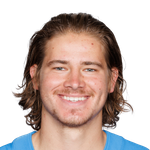 No one knew he was going to start last week, including him, so when you see him complete 22-of-33 passes for 311 yards and a touchdown against the Chiefs, you sit up in your chair. The Chargers offensive line did a great job keeping him protected, as he was sacked just twice on 38 dropbacks. The Panthers defense doesn't have a single sack through two games, so that's good. It's pressure that threw Herbert off when I watched his college film. When he stands tall, there's likely no one with better mechanics. It's tough to see him asked to do much in this game, though, as the Panthers have allowed 243 yards and six touchdowns on the ground to running backs through two games. Dating back to last year, they've allowed 33 rushing touchdowns to running backs, while the next closest team has allowed 19 of them. Herbert has some mobility to his game as well, and he showed it rushing for 18 yards and a touchdown last week. There will be some games we'll look to him, but there's a reason the Panthers have allowed the second-fewest fantasy points to quarterbacks through two games.