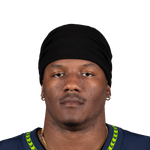 Week 2 was more of the timeshare we envisioned before the season started, as Carson totaled 20 touches to Hyde's seven touches. When the ball is in his hands, Carson looks good... refreshed. They're working to get him in space in the passing game, too, which certainly raises his floor. The Cowboys have faced a league-high 65 rushing attempts through two weeks, but they haven't allowed a whole lot of efficiency, as they've allowed just 3.40 yards per carry and 1.30 PPR points per target. That amounts to just 0.61 PPR points per opportunity to this point, which is the third-lowest mark in the league. While the Cowboys were a team to run the ball against last year, things change under a new coordinator, and Mike Nolan has apparently put more emphasis on stopping the run. Carson should still be started as a high-end RB2, but just know that running backs haven't been particularly efficient against them to this point. Hyde isn't someone who can be trusted outside of maybe a game the Seahawks are expected to win by double digits.