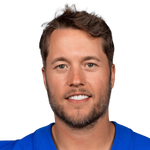 When some drafted Stafford as the QB12 (or around there) and thought they were getting a top-five guy based on last year's limited sample size, they didn't expect this. He's currently the QB19 in fantasy, though missing Kenny Golladay has not been great. He's going to bounce back, though he was never going to be a top-five quarterback. He gets his best matchup of the year here, but oddly enough, the Cardinals defense as a whole has allowed the third-fewest fantasy points per game to opponents. Crazy, right? That's likely due to the competition, as the 49ers and Washington don't put up very many fantasy points. Suddenly, the Cardinals are getting to the quarterback, as they've generated a sack on 9.6 percent of dropbacks, which ranks as the fourth-highest mark in the league. The pressure is likely a big part of the reason they've allowed just a 57.6 percent completion rate, which ranks second to only the Steelers. Still, we can't forget what this defense looked like last year when they allowed 38 passing touchdowns and a 70 percent completion rate in the same exact scheme. The addition of Isaiah Simmons was a big one, but we can't pretend his three tackles are the reason for all that change. We essentially can't rely too much on a small sample from 2020 and oddsmakers agree. Stafford threw for 385 yards and three touchdowns when these teams met back in Week 1 of last year, finishing as the QB4 that week. If Golladay plays, Stafford deserves a bump into low-end QB1 territory. If Golladay sits again, he's still in the streaming conversation, but more of a high-end QB2.