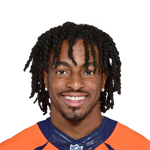 In his first NFL game, Hamler ran more routes than any other Broncos receiver. He's been mixed in the slot as well as the perimeter, though he's running the majority of them on the perimeter. That's a bit concerning, as the Bucs best cornerback Carlton Davis plays there, but it's worth noting that Davis has 4.53-second speed while Hamler ran a 4.27-second 40-yard dash in pre-Combine testing. The Bucs did allow 14 pass plays of 40-plus yards last year, which ranked as the fifth most, so there's a chance Hamler gets behind the defense. If he keeps getting seven targets like he did in Week 2, Hamler is going to be someone to look at as a boom-or-bust WR5-type option.