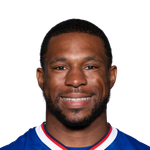 It hasn't been the explosion fantasy managers were expecting when Taylor took over the starting job with the Colts, as he's racked up a solid 48 carries, but he's averaged just 3.8 yards per carry and scored twice on them. He's currently the No. 15 running back through three weeks and now set to go against the Bears tough run defense. Going back to the start of last year, there have been just three running backs who've hit the century-mark against them, and one of them was in Week 17 in a throwaway game. The good news is that running backs get plenty of opportunity to rack up the touches, as there have been 15 running backs who've totaled at least 15 touches against them in their last 19 games. Both Adrian Peterson and Todd Gurley were able to accumulate 80-plus yards on the ground against them, so it's not like it's a must-avoid matchup, but rather one that caps upside. We knew the opting out by Eddie Goldman would impact this defense, but they've allowed 0.94 PPR points per opportunity in 2020, which ranks as the eighth-most through three games, with the majority of that coming on the ground, as they've allowed 4.93 yards per carry and four rushing touchdowns. Meanwhile, they've allowed just 4.71 yards per target and 22.9 PPR points through the air, which is the eighth-fewest in the league. This matchup suits Taylor's skillset better than it does Hines, so keep plugging Taylor in as a high-end RB2 who's getting great workloads, even if he's not crushing his opportunity just yet. Hines bounced back and saw 12 opportunities last week, which restores confidence, and it's possible he's even more involved now that Campbell and Pittman are out, though the Bears have done well with pass-catching running backs to this point. Still, I'd guess he sees at least 10 opportunities, which makes him a flex/RB4-type option in a tough matchup.