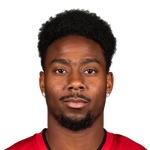 We talked about Gage the last two weeks, saying he is a fine bye week replacement now that Julio Jones is back in the lineup, as he just makes the entire offense run that much smoother. Gage has caught 10 balls for 119 yards over the last two games, which is perfect for someone who's available on most waiver wires. The matchup this week is tougher than we expected. The Panthers have Corn Elder covering the slot, and he's done a good job, allowing just 10 catches for 52 yards and no touchdowns on 16 targets. The only slot-heavy receiver who produced against them was Keenan Allen, who did most of his damage outside of Elder's coverage. Knowing the Panthers have allowed the second-fewest yards per reception and the sixth-fewest fantasy points per game to wide receivers, it may not be the best time to play him as anything more than a WR5 with minimal upside.