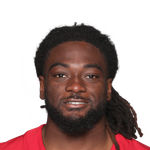 With Deebo Samuel out of the lineup for a few weeks, Aiyuk has a massive opportunity to make some waves in fantasy. Even with Samuel in the lineup the last few weeks, Aiyuk has averaged 6.6 targets/carries per game, so he's been involved. Coming off a career-high 115 yards against the Patriots, Aiyuk will have what might be the best matchup in the league. Wide receivers have outscored running backs by a massive 37.6 PPR points per game against the Seahawks. They've already allowed 132 receptions to wide receivers through six games, which amounts to 22.0 per game. We know the Seahawks are a matchup to attack, right? Well, it should make you feel better to know that a league-high 65.6 percent of the fantasy production that has gone to skill-position players against them has gone to wide receivers. It surely helps that their opponents' wide receivers have seen a league-high 188 targets despite the Seahawks already having their bye week. It's not just volume, either. They are one of three teams in the league who've allowed a 70-plus percent catch-rate to wide receivers. The other two teams? The Texans and Jets. With the lack of healthy running backs and Samuel out, Aiyuk should be considered a rock-solid WR3 with top-12 upside this week.