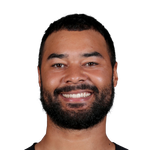 With both Zach Ertz and Dallas Goedert out of the lineup, Rodgers played as the primary tight end against the Giants, and he delivered. All in all, he played 69-of-81 snaps, saw eight targets, and netted 6/85/0 on them. We know how important the tight ends are in the Doug Pederson offense, so we shouldn't be all that surprised. The Cowboys have allowed 40 yards and/or a touchdown to six different tight ends this year, including a four-catch, 60-yard, one-touchdown performance to Logan Thomas last week. He did all of that on just four targets. The 2.06 PPR points per target the Cowboys have allowed to tight ends ranks as the ninth-highest mark in the league. They've allowed the 10th-most points per game to tight ends despite seeing just 6.4 targets per game to them. Meanwhile, the Eagles have targeted their tight ends 11.7 times per game. Rodgers is someone you should consider as a low-end TE1/high-end TE2 streamer.