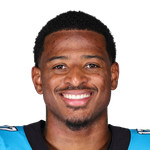 With Odell Beckham now out for the season, Higgins walks into the starting lineup. He saw six targets in relief of Beckham, catching all of them for 110 yards against a Bengals team that has struggled against wide receivers, but were also without their top cornerback in that game. The concern with Higgins moving forward is the lack of volume out of this offense, as Mayfield has averaged just 28.3 pass attempts per game, and the wide receivers have seen just a 50 percent target share, which amounts to just over 14 targets per game available to them. The good news is that the Raiders are another plus matchup, though there may not be many pass attempts. They've seen just 18.7 targets per game against wide receivers, which is why they've given up the 11th-most fantasy points to receivers. From an efficiency standpoint, they've allowed 2.02 PPR points per target, which ranks as the sixth-highest mark in the league. The Raiders perimeter duo of Trayvon Mullen and Nevin Lawson have combined to allow 39-of-56 passing for 450 yards and five touchdowns in their coverage, so the perimeter is where most of the damage has been done. Higgins may not be an ultra-consistent receiver, but he should offer WR4 value in a pinch this week.