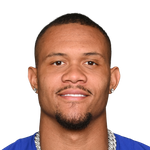 It seemed that every catch Golladay made last week, he was taking a big hit. That's far from ideal, though he continually comes down with tough catches. The 2.0 yards of separation at target is the fifth-lowest mark in football, so we should expect that to continue happening. The Colts have been one of the better defenses in the league through six games, but they've also been slipping a bit as of late and have allowed six top-36 wide receivers in their last two games. It's good news for Golladay that 61.7 percent of the passes that have been thrown against the Colts have gone to wide receivers, which ranks as the fourth-highest percentage in the league. While the Colts haven't allowed tons of fantasy production this year (they've allowed the fewest fantasy points per game overall to opponents), 59.3 percent of the production they've allowed to skill-position players has gone to wide receivers, which ranks as the third-highest mark in the league. He's going to see the most of Xavier Rhodes, the cornerback Golladay knows from his time in Minnesota. I'm not overly concerned with the matchup for him this week and would suggest starting him as a low-end WR1/high-end WR2.