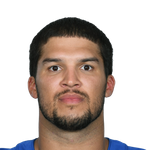 Don't look now, but Burton is being used eerily similar to the way Eric Ebron was used with the Colts. Since joining the starting lineup, he's seen at least five targets in each game, and even got a goal-line carry last week. The Lions have been one of the better teams at defending tight ends, but it's an extremely small sample size for a team that was slightly below average against them last year, in the same scheme. Still, teams have chosen to target their tight ends just 14.2 percent of the time against them, which ranks as the third-lowest number in the league. Even worse, just 9.4 percent of fantasy production has gone to tight ends. Still, targets are all you can ask for from a streamer that's available in almost 80 percent of leagues, and Burton is getting them. He appears to be someone who'll be in the streamer conversation more than not, but this isn't a matchup that absolutely needs to be attacked. He should be considered a high-end TE2 with his steady flow of targets.