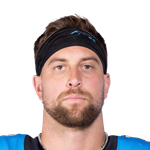 Going into his bye week, Thielen ranked second in air yards (684) despite ranking 11th in targets. Even though the Vikings offense has lacked elite pass attempt volume, the expected fantasy output on Thielen's targets is greater than the average receiver target. The downside in this matchup is that the Packers have allowed fewer yards than every other team in the NFL when it comes to wide receivers. Through six games, they're allowing just 149.8 yards per game to them. Lack of volume has been a big part of the issue, as they've allowed 1.78 PPR points per target, which is right around the league average. Thielen was able to rack up six catches for 110 yards and two touchdowns in the first meeting between these two teams, though much of that came in garbage time. Since that game, Jaire Alexander has allowed just 10-of-17 passing for 56 yards in his coverage. Pretty dominant, right? I'd guess that he shadows Thielen in this game. I'm not going to say that he'll shut out Thielen, but he is good enough to temper expectations a bit. Thielen has scored in 5-of-6 games and is averaging 8.2 targets per game, so he's still in the low-end WR1/high-end WR2 conversation but it's not a week play him in DFS cash lineups.